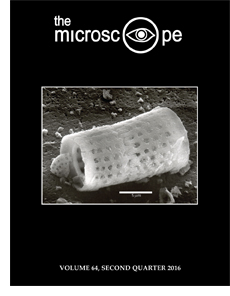 On the cover
A scanning-electron photomicrograph of a “kings crown” diatom, Melosira granulata, used as an ingredient in an asbestos-containing product. See Origins of Asbestos Product Identification, on page 79. (Courtesy of James R. Millette)

Gary J. Laughlin
The Microscope 64 (2), p ii
Excerpt: The following is an editorial written by Dr. Walter C. McCrone for The Microscope in February 1984 that was not published. He describes the return of chemical microscopy courses at Cornell University in 1984 after a period of decline. I have included a brief history of the Cornell summer course when Dr. McCrone began teaching it and up to the present day.

First, the bad news: Cornell University, the first school in the U.S. and one of the first in the world to teach organized courses in microscopy (since 1890), gave up its microscopy courses when George Cocks left for Los Alamos in 1980. Microscopy at Cornell had been in decline since Clyde Mason’s retirement in 1965; in fact, it would not be too far off the mark to say microscopy at Cornell declined from 1946, when Mason moved the lab to chemical engineering because of his interest in metallography and metallurgy.

Joseph Insana, B.S. and Patrick Buzzini, Ph.D.
The Microscope 64 (2), pp 51 – 60
Abstract: Refractive index (RI) is known to be a highly discriminatory optical property used in forensic comparative examinations of glass evidence. RI is known to vary at different locations on a given glass object. In addition to spatial heterogeneity, variation in RI measurements could be observed between the external surface and the bulk of a glass object. Considering the improvements of modern glass manufacturing processes, this study aimed to compare RI data from the external surfaces of glass containers to those collected from their bulk in order to determine if a significant difference exists. The body areas of eight glass containers were selected for this study. A novel methodology was developed to isolate the external surface layer of glass fragments from their bulk. A total of 560 measurements were carried out using the glass refractive index measurement (GRIM) system. The results show that differences were detected for three out of eight containers. Data produced in this study can be helpful to trace evidence examiners when evaluating potential differences observed during comparative examinations or while attempting to explain the dispersion of RI data as a consequence of a sampling method with respect to container glass.

John J. Henderson and John A. Vucetich
The Microscope 64 (2), pp 61 – 68
Abstract: Microhistologically based studies of diet focus on the identification of fragments of food items that appear in samples of scat. When the subject is an herbivore, the fragments of interest are plant, grass, and woody stem. Diagnostic fragments include cellular features (cell shapes, stomata, tracheae, etc.), inclusions (silica, calcium carbonate, calcium oxalate, starch, etc.), and epidermal surface growths (trichomes, scales, glands, etc.). Rough botanical groupings can generally be determined with one or two characteristics, whereas many botanical fragments can be identified to species using multiple characteristics. Despite some challenges such as differential digestibility and identification of single small fragments, microhistological studies of diets have provided some fascinating insight into the foraging behavior of domesticated and wild herbivores.

Brian J. Ford
The Microscope 64 (2), pp 69 – 78
Excerpt: Doomsday was 20 years ago. A million people faced death in Britain, and the rest of the world was under threat. It was in March 1996 that a new disease had been officially acknowledged — a degenerative and fatal neurological condition contracted by consuming cattle. This was Mad Cow Disease. It was a scourge unlike any we had ever seen and was caused — not by viruses or bacteria — but by an unfamiliar agent: the prion.

James R. Millette, Ph.D., D-IBFES; Richard S. Brown, M.S.; William R. Boltin, M.S.; and Thomas J. Hopen, M.S.
The Microscope 64 (2), pp 79 – 87
Abstract: After the Asbestos Hazard Emergency Response Act (AHERA) was signed into law in 1986 to address the problem of asbestos in the nation’s school buildings, several school systems and state attorney generals sued the manufacturers of asbestos-containing building materials (ACBMs) to get money to pay for removal of the materials from their buildings. While the manufacturers of some ACBMs could be determined from sales receipts and building specifications, the provenance of many products, such as sprayed-on fire proofing, acoustical plaster, pipe insulation, ceiling tiles, and floor tiles, required a compositional analysis by microscopy and comparison with known exemplars or manufacturers’ formulae. In one of the first cases, the attorney general of the state of Maryland obtained through court order thousands of pages of formula documents from former asbestos product manufacturers. These documents had been redacted, and the name of each company had been replaced with a specific code number. In addition, the Maryland attorney general had obtained several samples of product materials for which the manufacturer was known; these were also coded. Although it was a daunting task to organize the thousands of pages of information in a way that it could be used efficiently, it soon became apparent that the majority of the products could be classified based of the type of asbestos present and which of about two dozen additives, binders, and fillers were used to construct the products. Ultimately, a spreadsheet database was constructed with columns for the code number information of the product, the dates it was manufactured, columns related to the type of asbestos (chrysotile, amosite, crocidolite), and the percentages of 20 possible constituents. In a few situations where two products were virtually identical, a small amount of different additives such as their surfactants could be used to differentiate the two. Eventually, through other cases — including those of the attorney generals of Massachusetts, Hawaii, West Virginia, and Illinois — and U.S. Environmental Protection Agency (EPA) public documents and court documents published by legal groups, information was released that linked a specific manufacturer with particular formula information. The authors of this study were able to construct a comprehensive database of the ACBM product compositions. This database was then used with microscopical analysis and chemical testing to identify the manufacturer of the majority of ACBMs. The development of the database could not have been accomplished without an extensive investigation into brand names and industry-wide or company-specific terms to identify each of the components listed on a company’s batch production sheet. This led to “A Dictionary of Terms Related to Additives Found in Asbestos Building Products,” published in The Microscope in 1999.

The Microscope Past: 45 Years Ago | A Scanning Electron Microscope Technique for Study of the Internal Microanatomy of Embryos

P.B. Armstrong
The Microscope 64 (2), pp 89 – 91. Originally published in The Microscope, Vol. 19, Third Quarter, July 1971, pp 281 – 284.
Abstract: A technique for the study of the internal anatomy of embryos with the scanning electron microscope is described. Partially sectioned paraffin-embedded embryos are processed for examination with the scanning electron microscope by critical point drying, after removal of paraffin. The technique should prove useful for study of a variety of problems where knowledge of micro-anatomical relations in three dimensions is required. 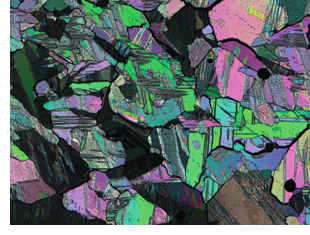