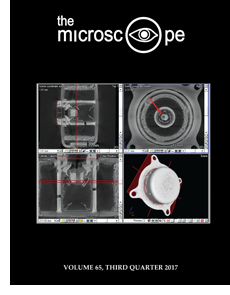 On the cover
An automobile airbag inflator housing and enclosed airbag initiator examined with computed X-ray tomography, a 3-D imaging technique that allows the internal structure of an object to be sectioned into thin slices and viewed in any direction. See Takata Airbag Death: Source-Determination Investigation of Metal Fragment Recovered from Driver, page 99. (Photo courtesy of Richard S. Brown.)

Gary J. Laughlin
The Microscope 65 (3), p ii
Excerpt: This year, Inter/Micro will mark its 70th anniversary (June 11 – 15, 2018), continuing the vision of its founders, Walter C. McCrone and Charles Tufts, who developed this first of its kind “international microscopy” conference in 1948. Inter/Micro has always been a gathering of microscopists from around the world, and for the past 33 years, it has been held and hosted by McCrone Research Institute in Chicago. Prior to this, the conference alternated between Chicago and various locations in the U.K., including Brighton, Leeds, London, and Cambridge. In the past decade, we have welcomed speakers and attendees from the U.S., the Netherlands, Israel, England, Canada, Australia, Turkey, India, Germany, Taiwan, Norway, and Austria. Inter/Micro had one of its most successful and memorable years ever in 2017, and I would like to thank everyone who participated.

Richard S. Brown, M.S. DABC
The Microscope 65 (3), pp 99 – 105
Abstract: In December 2015, the driver of a 2006 Ford Ranger pickup truck was killed after colliding with an object in the road. The truck’s airbag module had deployed, and a subsequent autopsy revealed what appeared to be a gunshot wound in the driver’s neck. The suspected source of the wound was a metal fragment slug from the driver’s side airbag module located in the steering wheel of the truck. MVA Scientific Consultants was asked by the coroner’s office to determine the composition of the slug recovered from the driver and to determine the source of the slug. Examination of the components of the airbag module revealed that the airbag inflator had ruptured from excessive pressure and that the metal initiator inside of the airbag inflator had fractured into two large pieces. One of the pieces penetrated the driver’s neck, and the other piece was found pressed onto the steering wheel mounting nut. The types of materials analyzed include labels on the inflator, adhesive, and fracture patterns. Fluorescence microscopy, scanning electron microscopy coupled with energy-dispersive X-ray spectrometry (SEM-EDS), Fourier-transform infrared microspectroscopy (FT-IR), calipers, and a microchemical test for ammonium ions were used during the investigation. The investigation was supplemented by examining an exemplar airbag inflator using 3-D computed X-ray tomography. The airbag inflator, containing ammonium nitrate (NH4NO3), was a product of the Takata Corporation, whose defective airbag inflators are linked to at least 16 deaths and more than 100 injuries, resulting in the largest recall in automotive history. 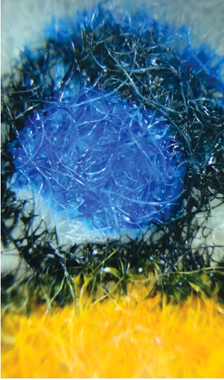